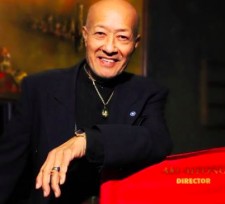 Boston, MA, October 7, 2016 (Newswire.com) - ​The Young Adult Action/Fantasy Feature Film is backed by Chinese Financier and Executive Film Producer LV Jianmin and Spring Era Films, HK. L. Based on Book One of the titular series (screenplay also by author T. A. DeBonis), the novels were discovered by world renowned actor, producer and equality in media activist, Aki Aleong. Aleong has over 142 feature film and television credits as actor, producer, director and writer; and a career that has spanned over 60 years in the industry, Author DeBonis feels fortunate that such a legendary figure as the multi-talented Aleong has taken on the task to bring "The Monkey King's Daughter" (TMKD) to the silver screen.

“No one understands the essence of TMKD more than Aki,” DeBonis said. “This is far more
than a new action heroine and legend coming to life. TMKD is about empowerment…about a
young Asian American girl caught between two cultures, discovering that she can overcome
any obstacle by learning to believe in her true self. TMKD is a story with universal family
values that resonates worldwide, one that transcends cultural borders —a true East/West
crossover film."

Producer Aki Aleong’s off-camera work in the film industry is equally impressive. He has
served on the National Board of the Screen Actors Guild, appointed National Chair of SAG'S
EEOC and was a member of the President's Diversity/Affirmative Action Task Force. Aleong
has also been Executive Director of AIM (Asians in Media), Vice President of The Media Coalition of Los Angeles and President of MANAA (Media Action Network for Asian Americans).

“TMKD is a film that revolves around people of color and culture,” DeBonis said. “Maintaining
the ethnicity of key characters and their cultural values is essential to the storyline. I can’t
think of anyone more qualified than Aki to ensure that this critical element to the story is not
lost in the making of this film. I expect TMKD to shatter the glass ceiling and catapult Asian
and Asian American actors into mainstream Hollywood roles they rightly deserve.”

The film has a reported $12-15M budget and will be shot in China, Canada and the United States. ACE Studios, Guangzhou China, will handle the overseas production.

The Monkey King’s Daughter® novels are available worldwide. Additional information about
the series and upcoming film can be found at: www.themonkeykingsdaughter .com