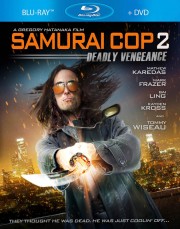 Samurai Cop 2: Deadly Vengeance will be released on Blu-ray and DVD this Tuesday, ‪January 12, 2016 on Amazon.com‬.

This much anticipated sequel to the legendary cult classic, Samurai Cop (1991), explores the dynamic duo of Detective Frank Washington (Mark Frazier) and Joe Marshall (Mathew Karedas), who are teaming up once again in this action-packed tour de force. This time their mission is to solve a series of assassinations being committed by a secret group of sexy female vigilante killers.

"I'm a big fan of the first film and it's amazing to work with the original cast as well as the new generation of cast members. I feel really blessed. I hope I did the ensemble justice. It helped to have reverence for the cast and I respected everyone's work in it."

This film utilizes 35mm film, which is rare in today's digital world.  This is a new trend as 35mm and 70mm film are being used in the new James Bond and Quentin Tarantino films. Heising's scene with Wiseau utilized 35mm film, which was apropos as Hatanaka truly gave homage to the original film while also keeping it fresh and current enough for modern day audiences.

Pre-order it before it sells out at http://www.amazon.com/Samurai-Cop-Deadly-Venge…/…/ref=sr_1_3