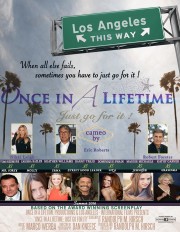 Once in a Lifetime: Just Go For It! is a much anticipated dramatic film written, directed and produced by the multi-talented hyphenate Randolph M. Hirsch.

This moving film is about Mitch Hammond, a challenged man in his early thirties, who is going through a bitter divorce and watching his business crumble right in front of his eyes. He walks in on his cheating alcoholic soon to ex-wife (Swain) with one of his clients after coming home from a business trip. Enter Jennifer, a young single mom, struggling to raise her nine year old daughter Molly (Carissa Bazler), while trying to meet someone new.  The whole story is being told through Molly’s eyes. With award-winning talents such as cinematographer Dan Kneece and composer Marco Werba, even the crew is all-star!

Hirsch, like the title of his film made a bold decision to retire from his successful accounting business to pursue his dreams of filmmaking after a near death experience. So much like the title, Hirsch literally went for it just once in this lifetime! Based on the award-winning screenplay which won Best Screenplay at the Lake Arrowhead Annual Screenwriting Contest and Film Festival), “Once In A Lifetime: Just Go For It!” will be the must see indie!