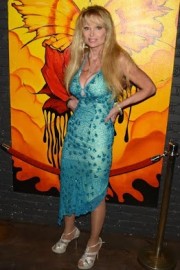 Accomplished and noted actress, Laurene Landon just completed the much anticipated Sky opposite Diane Kruger, Norman Reedus and Lou Diamond Phillips. The Hollywood Reporter declared that "Landon registers vividly enough to make you wish the entire movie were about her." IFC Films, the prominent film distribution company, has just acquired the North American rights to Sky.

This statuesque blond beauty just completed the much anticipated Sky opposite Diane Kruger, Norman Reedus and Lou Diamond Phillips. The Hollywood Reporter declared that "Landon registers vividly enough to make you wish the entire movie were about her." IFC Films, the prominent film distribution company, has just acquired the North American rights to Sky. This is a real coup for the film as this noted company distributes acclaimed independent films and documentaries under the IFC Films, Sundance Selects and IFC Midnight brands.

Laurene recently starred opposite George Lazenby (James Bond—On Her Majesty's Secret Service) in Hunter, plays Detective Higgins in the much buzzed about Samurai Cop 2: Deadly Vengeance opposite Bai Ling (The Crow), cult icon Tommy Wiseau (The Room) and Mel Novak (Bruce Lee's Game of Death) and Joe Estevez (Dexter). She also had a supporting role in the Melanie Griffith/Alexia Landeau feature film Day out of Days directed by Zoe Cassavettes. If that wasn't enough, this in demand actress is currently filming Future Punks opposite James Duval (Independence Day), a hilarious retro-comedy along with a starring role in Syndicate Smasher, where she is reunited with Novak and Estevez.

Laurene made a smashing impression as "Molly", one of two female wrestlers, who are managed by Peter Falk, in Robert Aldrich's (The Dirty Dozen) uproariously raucous comedy, ...All The Marbles where she beat out over 2,000 other young actresses vying for the role, including one actress named Kathleen Turner. The fiercely athletic Landon also performed a lion's share of her own stunts in the film. Landon was very funny as a daffy stewardess in Airplane II: The Sequel and was excellent as Mike Hammer's loyal secretary "Velda" in I, the Jury opposite Armand Assante. Laurene was especially strong and impressive in two edge of your seat action/adventure features for director Matt Cimber: she's the titular rugged warrior woman in Hundra and a gutsy half-Native American spitfire in Yellow Hair and the Fortress of Gold. Landon was once again, on the money, effective and engaging as courageous policewoman "Teresa Mallory" opposite Bruce Campbell in the popular Maniac Cop and its superior 1990 sequel, Maniac Cop 2. After a regrettably lengthy absence from acting, Laurene made a welcome comeback with a sizable co-starring part in the legendary Master of Horror episode, Pick Me Up. Laurene is also in pre-production on the provocative real life traumedy called The Hostess Twinkies, which chronicles the sordid subsistence of Lolly, a dance hall hostess in the squalid bowels of downtown LA. Laurene is the writer, producer and star of this controversial film with the legendary Larry Cohen (Cellular, Phonebooth) directing. Outside of acting, Laurene writes scripts in her spare time and is devoted to animal rights charities. This multi-talented actress is also an award-winning gold medal lyricist who authored rap music for an L.A. Metro Transit Authority video.