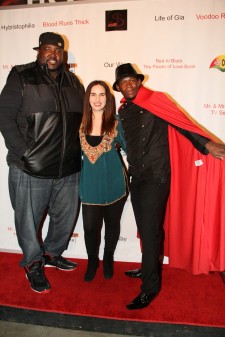 The Hybristophilia wrap party was an epic success with tons of horror fans, friends and family of the cast and crew.

Burbank, CA , October 28, 2016 (Newswire.com) -  The epic wrap party for the much anticipated horror film, Hybristophilia, from award-winning writer-director-producer Romane Simone, was on October 27th at 9pm at the popular Flappers Comedy Club in downtown Burbank. There was a red carpet, and a costume contest at this event which was jam packed with horror fans and friends and family of the cast and crew. Simon produced and directed this film and Rhonnie Fordham was the screenwriter.

This film stars renowned actor Quinton Aaron, famously known for the hit box office movie, "The Blind Side," which he co-starred alongside Academy award-winning actress Sandra Bullock. "I really enjoyed working with such a talented cast and crew. It was truly a wonderful experience," said Simon.

"Hybristophilia" is about an ambitious news team that arrives at a secluded farmhouse for an exclusive interview with an at-large serial killer known as the Sleepy Stalker, a murderer known for attacking "sleepy" small towns. The news crew includes a hotshot young female reporter as well as the team's guest expert: a psychologist noted for her expertise in psychopaths. They all soon discover that the farmhouse was the site of a grisly murder-suicide thirty years earlier and is now believed to be haunted.

After exploring the home, the news crew is surprised by the arrival of the Sleepy Stalker. Later on, the crew settle into the living room for a taped interview with the Sleepy Stalker. However, what starts off as a disturbing confession that soon turns into a long night of bloodshed and shocking revelations to be released in the spring of 2017.

Quinton Aaron is best known for his portrayal of Michael Oher, aka Big Mike, alongside Oscar winner Sandra Bullock, in the Academy Award winning hit movie, The Blind Side (2009), which has grossed over $300 million in U.S. box office alone. Aaron made his film debut as Q in Michel Gondry's "Be Kind Rewind," starring Mos Def and Jack Black. He has also acted in "Fighting" with Channing Tatum and Terrence Howard. Aaron has appeared in two episodes of the TV show Law & Order  (Season 17, episode "Bling" episode "Fallout" as a bouncer). Aaron also guest-starred with Jill Scott in an episode of Law & Order: Special Victims Unit. Quinton also guest-starring in the "We All Saw This Coming" episode of "Mercy".  Quinton guest-starred in the season finale of Harry's Law  with his "The Blind Side" co-star Kathy Bates.

Source: The Williamson Management on behalf of Hybristophilia