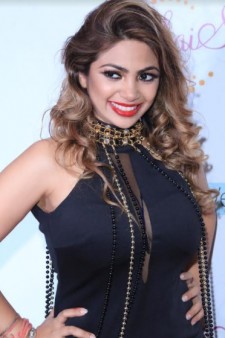 Award-winning celebrity fashion designer Sai Suman's Official Hollywood Fashion Show Launch, 'The Queen in Me,' at the Sofitel Hotel was a rousing success.

Los Angeles, CA , April 14, 2017 (Newswire.com) - ​​On Tuesday, April 11th at 7pm, Award Winning Hollywood Celebrity Fashion Designer Sai Suman launched her much anticipated official Hollywood Fall/winter 2017 Runway collection, which took place at the swanky Sofitel hotel at 8555 Beverly blvd in Los Angeles. It was a completely star-studded evening jam packed with celebrities and media. The event was presented by Sai Suman in conjunction with the World Networks which was founded by the vivacious entrepreneur Lousine Karibian and the media partners of the event who hosted the red carpet, noted actress/fashion blogger Vida Ghaffari (The Mindy Project, Jimmy Kimmel Live, So Very Vida) and celebrated actor Ford Austin (Heels, Live by Night) of "Live with Ford and Vida".

The bustling red carpet, chock full of international celebrities and media, started at 7pm and was followed by the Fashion Runway show at 9:30pm having the elegant royal era theme, 'The Queen in Me' with a romantic Paris feel and runway music reminiscent of "La Vie En Rose". Models walked in the perfect Royal exquisite and glamorous designs illustrating of the theme as it describes, swaying the audiences taking them back to the 1920 era with the modern touch of 2017 styling and detailing on a time travel back and forth between 1920's to 2017 with the mesmerizing women and men's fall/winter collection. The collection has a very unique fabric and appliqué detailing on women's collection whereas Mens suit/tux has a very interesting and eclectic mix of fabric combination seen in velvets, cotton and even leather making it stand out from the basic regular tuxedo trend. This dazzling collection has gold, diamond and pearl delicate appliqué with few having a 3D flower laser cut detailing on the Royal style gowns.

"I live fashion...I breathe fashion! Fashion is not just a necessity for me, but it's also my passion. Impossible unique creations challenges me. Fashion for me is a platform to narrate story in my own way through my Runway collection! This season's inspiration "The Queen in me" is dedicated to empowering women and highlighting their beauty within. The Queen in me is to let all women know and discover that there is a Queen/ princess in everyone. It's all about embracing your beauty no matter what shape or size you are! You are beautiful because you are you."

Overall it was a show that truly gave a feel of all the Queens all gathered in a royal gala charming the audience with their regal style and fashion in a story narrated by the designer herself with her limitless imagination and creativity. The models look was created by Beyond Beauty and models are from TMJ Agency founded by Terita Jackson.

This designer is surely going to be one of the names to be remembered in history among the other legendary designers who are as gifted as her! Sai Suman is an epitome of style and fantasy and has surely achieved a niche at a very young age inspiring many young aspirants to achieve their dreams.

The Hollywood Launch Runway fashion show was a concept created by Sai Suman and was executed by the World Networks to showcase Sai's vision and creativity to all her celebrity and media colleagues for them to experience the journey of her fantasy and glamour under one roof, giving them the experience to be a part of a world-class Couture high fashion fall/winter 2017 launch collection.

Sai Suman has been designing for HOLLYWOOD's A list stars at red carpet galas and premieres as well as other events and also has done personalized designing. Her collection and designs have been a hit and quite popular among the Hollywood actors and the whole entertainment industry in no time where Sai at such a young age has reached an international level of high appreciation and credibility.

Sai has been showcasing in many international platforms as well presenting her collections at premieres and highly acclaimed top fashion events such as New York Couture Fashion Week, Dubai Fashion Week, and Mercedes Benz Fashion Week Australia and Mercedes Benz fashion week in Europe, to name a few and Sai has carved a niche for herself at the very beginning of her journey.

Recently Sai was honored by the Entrepreneur Award of the year 2017 in Fashion Designing at the World Networks in Los Angeles as the ambassador of Dubai for the Network.

Sai has also been awarded as “Fashion Designer for 2013-14” at the Dubai Fashion Awards. This wunderkind has also won “Young Entrepreneur of the Year and Excellence in Designing” award at the Global Achievers Awards held in Bangkok in May 2013 for her astounding creative sensibilities.

‘SAI SUMAN’, has been transforming her imagination, fantasy into a wearable piece of art. Her work represents a unique and intriguing combination of fashion and technology. Sai's collections are compromised of impeccably cut outfits and sophisticated haute couture and red carpet gowns that are ornate and intricately detailed while her designs speak volumes about her passion and her work.

Sai Suman is a designer who creates a blend of western fashion elements with a traditional touch of handwork, creating a new fashion statement. She likes experimenting to create uniqueness in her style and to bring out timeless yet trendsetting collections. Sai Suman loves to create a unique blend of western with a traditional touch to it. She has always been inspired by the futuristic vision in fashion hence has presented several art pieces integrated with light technology in many esteemed international fashion week show. Sai Suman has been a pioneer in experimenting the use of unique fabrics designing the costumes for Bollywood actresses. Sai has also designed looks for international television stars, contributed her designs to several Bollywood music videos, magazine cover shoots, reality shows and is now styling for Hollywood as well.

Sai is the youngest designer to create and combine fashion with technology and creativity, presenting Haute Couture with Hi-Tech designs in various international platforms as the youngest Indian designer alongside with the top senior renowned international designers from different countries respectively.

The inspiration for this young and talented Hollywood celebrity fashion designer, 'Sai Suman,' has been the surrealistic fantasy world that tickles her imagination and transforms that fantasy into a wearable pieces of art.

Source: The Williamson Management on behalf of Sai Suman