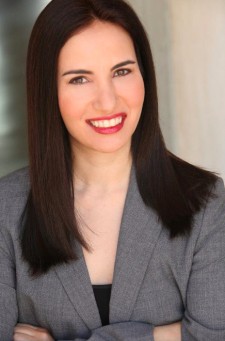 Award-winning actress and fashion, beauty and lifestyle blogger, Vida Ghaffari, has an action packed weekend ahead. She just received a best actress nomination from the Love International Film Festival (LIFF), which will have it's awards ceremony tomorrow night at the historic Wilshire Ebell Theatre. She will also be an main stage MC this Sunday at the Wonder Women Tech Conference.

Los Angeles, CA, July 15, 2016 (Newswire.com) - ​​​Award-winning actress and fashion, beauty and lifestyle blogger, Vida Ghaffari, has an action packed weekend ahead. She just received a best actress nomination for her lead role in the edgy drama, Strangers in a Book, from the Love International Film Festival (LIFF), which will have it's awards ceremony tomorrow night at the historic Wilshire Ebell Theatre. The LIFF and TLLCC is funded by the highly acclaimed and prize wining spiritual poet Ata Servati.  Mr. Servati is also a noted actor and filmmaker.​ She will also be an main stage MC this Sunday at the noted Wonder Women Tech (WWT) Conference, which was founded by Lisa Mae Brunson,  a true creative visionary, speaker, author & social innovator that is committed to impacting humanity on a global scale.

Strangers in a Book is a bold, psychological thriller that deals with loneliness and isolation in a city as vast as Los Angeles. This dramatic film, written by PedramNavab and directed by Marc Rezvani, follows Sara in actress Ghaffari's (The Mindy Project, Mind of Mencia) dramatic debut, a hip and melancholic Iranian-American, who finds a misplaced book in a café and interacts will all sorts of dregs of society to find the owner of the book.  Some of the characters Sara meets along the way are an ensemble of noted actors such as Jon Mack (Saw VI, The Effects of Blunt Force Trauma), Christy McGinity Gibel (Little Women: LA), Carl Bressler (Battlefield, The Usual Suspects), Kristin West (Circus of the Dead), Marv Blauvelt (Jurassic City), Candy Fuentes, Pooneh Navab and a special cameo appearance by writer-producer Pedram Navab. This film was directed by Marc Rezvani, who also has a  cameo in the film David S. Barron was the cinematographer and editor. Myles Christensen and Bob Tiwana did the sound design. This film has also received 7 nominations at the prestigious FANtastic Film Festival in San Diego and won Best Guerrilla Film at the popular Action on Film (AOF) Festival in Monrovia, California and the noted Finow Film and Script Festival in Eberswalde, Germany.

I am so honored to be a main stage host of this incredible conference that was created by Lisa Mae Brunson, a true visionary. Lisa and her dedicated staff truly inspire, celebrate, and educate women and diversity where it's definitely needed the most...the tech sector. I will be honored to share the stage with her and her colleagues, who are the most devoted and accomplished women in the tech world!

"The LIFF is all about using art to inspire, to heal, and to ultimately bring us all closer as human beings; to grow as a unified world, no longer separated by race, religion, gender and economics, which is what I love supporting, so it's a true honor to be bestowed with a nomination by this fine film festival for a very dramatic role that is all about healing and unification," said Ghaffari.

If that wasn't already enough, Vida will also be a main stage host at the noted Wonder Women Tech Conference (WWT) this Sunday at the Long Beach Convention Center. WWT is a non-profit organization which produces  an annual conference and series of educational programming and initiatives that highlights, educates, and celebrates women and diversity in STEAM (Science, Technology, Engineering, Arts & Mathematics) innovation and entrepreneurialism. Our conferences and programming offer a variety of speakers, panel discussions, coding classes, community inclusion activities and other dynamic initiatives geared towards empowering women and diverse demographics.

Vida is on a real roll in her acting career. She recently voiced two characters in the award-winning animated film “Lovesick Fool” created by Emmy-nominated director Dominic Polcino (“The Simpsons,” “Family Guy,” and “King of the Hill”). Acclaimed actors Fred Willard, Lisa Kudrow, and Janeane Garofalo also voiced roles in this film. This comedic powerhouse landed a great co-starring role in Mindy Kaling's humorous and much buzzed about show "The Mindy Project." She has also starred in Comedy Central's "Mind of Mencia". These projects cap off a number of successes for the versatile starlet. She will soon be shooting a supporting role in multi award-winning filmmaker Gregory Hatanaka's "Darling Nikki" alongside James Duval ("Independence Day,"Donnie Darko"), Kristine DeBell("Meatballs"), Mel Novak (Bruce Lee's "Game of Death,""Black Belt Jones") and actor/director Thomas J. Churchill ("Checkpoint," "Lazarus: Day of the Living Dead"). She will also star in two films directed by Churchill as well as "Copperhead Creek" opposite James Van Patten (of "Saw" fame), which is a western by Rick Groat.