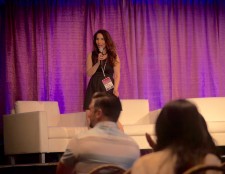 ​Award-winning actress and fashion, beauty and lifestyle blogger, Vida Ghaffari was the main stage MC this Sunday in the Grand Ballroom of the Long Beach Convention Center at the noted Wonder Women Tech (WWT) Conference.

WWT was founded by Lisa Mae Brunson,  a true creative visionary, speaker, author & social innovator that is committed to impacting humanity on a global scale. She created a  non-profit organization which produces an annual conference and series of educational programming and initiatives that highlights, educates, and celebrates women and diversity in STEAM (Science, Technology, Engineering, Arts & Mathematics) innovation and entrepreneurialism. Their conferences and programming offer a variety of speakers, panel discussions, coding classes, community inclusion activities and other dynamic initiatives geared towards empowering women and diverse demographics.

It was such an honor to be a main stage host of this incredible conference that was created by Lisa Mae Brunson, a true visionary. Lisa and her dedicated staff truly inspired, celebrated, and educated women and diversity where it's definitely needed the most...the tech sector. I was honored to share the stage with her and her colleagues, who are the most devoted and accomplished women in the tech world!

Vida is on a real roll in her acting career. She recently voiced two characters in the award-winning animated film "Lovesick Fool" created by Emmy-nominated director Dominic Polcino ("The Simpsons," "Family Guy," and "King of the Hill"). Acclaimed actors Fred Willard, Lisa Kudrow, and Janeane Garofalo also voiced roles in this film. This comedic powerhouse landed a great co-starring role in Mindy Kaling's humorous and much buzzed about show "The Mindy Project." She has also starred in Comedy Central's "Mind of Mencia". These projects cap off a number of successes for the versatile starlet. She will soon be shooting a supporting role in multi award-winning filmmaker Gregory Hatanaka's "Darling Nikki" alongside James Duval ("Independence Day,"Donnie Darko"), Kristine DeBell("Meatballs"), Mel Novak (Bruce Lee's "Game of Death,""Black Belt Jones") and actor/director Thomas J. Churchill ("Checkpoint," "Lazarus: Day of the Living Dead"). She will also star in two films directed by Churchill as well as "Copperhead Creek" opposite James Van Patten (of "Saw" fame), which is a western by Rick Groat.